Please listen to his story….

“I was told she would yell up in the grandstands, ‘Go, Joey, Go!'” he recounted during a visit to Children’s of Alabama hospital today. “Everyone around her would tell her, ‘Mary, Joey can’t hear you. He’s in the race car right now. It’s a little loud.’ She would say, ‘I don’t care. That’s my boy out there.'”
Joey Gase Sees Progress
Joey Gase is a youthful looking 21-year-old. He is so youthful, in fact, that many questioned whether he has a license to drive on city streets. But the native Iowan says he can see improvement in himself and his team as Talladega weekend approaches in the Nationwide Series. (Solomon Crenshaw Jr./screnshawjr@al.com)
Nowadays, the younger Gase hears his mom in his mind, and in his heart. Mary Jo Gase died suddenly of a brain aneurysm in April 2011. That’s what made his visit today to transplant patients at Children’s particularly personal for him.

“I know how hard I’m sure it is for them,” he said. “I’ve never been quite on this side before, how hard it is for them waiting for one of their organs and also, if they have received one, hoping that it’s going to be a successful one.”

Gase will drive the No. 52 Donate Life Chevy in Saturday’s Aaron’s 312 Nationwide Series race at Talladega Superspeedway. On the lid of the car’s trunk will a picture of Savannah Sides, a 5-year-old who insisted on registering to be an organ donor exactly one month before she was killed in a car accident.

Since he was 18 and his mother was unmarried at the time, the young race car driver had a major role in the decision to donate his mother’s organs.

“We made the call as a family but I was the one who had to sign all the paperwork,” he said, acknowledging a bit of weight on his shoulders. “But I knew it’s what my mom would have wanted. Later we found out that was absolutely 100 percent for sure what she wanted when we found her driver’s license and she was already a registered donor.”

Gase said his mother was able to improve the lives of 66 people.

“She was able to donate almost everything,” he said. “Her heart valves and her lungs went to research, and her corneas and skin tissue. Me, my sister have been fortunate enough to be able to meet one of my mom’s recipients who received one of her kidneys.”

That meeting really meant something to the race driver.

“When we met him, it made it that much more special to know that my mom is still living on through him,” he said. “If it wasn’t for her, most likely he wouldn’t be here today.”

After a month and a half of watering, weeding and pruning I finally picked my first tomato.  There are many to come, not ready yet, but soon. 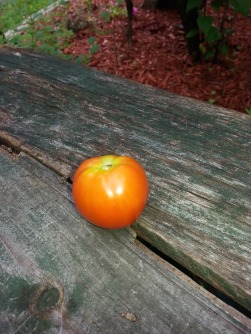 When you nurture something or someone, you take so much pride in the outcome.

Nurturing can take on so many meanings, depending on your life style.  It could be a new puppy, a vegetable garden, your lawn, and to some of us our children.

Here’s a thought, it may not always turn out the was we expect, or anticipate, all we can say to ourselves is we did the best we can.

Maybe you can take a moment and think about everything or everyone you nurture in your life.

Just a thought for the day.

I have been writing a blog for well over 2 years.  First one I started was about when my daughter was going through her heart transplant journey.  Just writing daily helped me to communicate with family and friends, also it helped me get my feeling out.  Many times I was crying as I was typing, but I always felt like I someone to talk to when ever I needed it.

Now I needed to start a new one about life after a heart transplant.  Everyday there are worries and concerns, but so, so grateful we are home.  Trying to get Lauren’s life back on track is difficult.  This girl has been through so much.  Physically and emotionally.  At times I feel our world is revolved around Lauren’s medication.  Constantly asking her did you take am, afternoon, midafternoon then evening pills.

I have connected with a couple of organizations that have help, with others that have gone through and are still waiting living in the hospital.  It helps a lot.

I have just joined blogging 101.  Now I feel I have a great support on how to connect with more writers who want to express different topics.  Plus I am getting tips on computers.  So much to learn.

I wanted to remind everyone of this great event.  Lauren will be riding with Mike Thibault.  Join them for a great day and a great cause.

Aside from undergoing a heart transplant, Lauren also has an extremely rare form of muscular dystrophy which contributes to the rest of her weaknesses. Come spend the day hanging with great people, riding through the countryside, listening to awesome music and of course, supporting a great cause!

If on July 12 you are in the mood to go for a nice motorcycle ride with a thousand or so of your friends, help contribute to a very worthy charity, have a chicken dinner and, lastly, see one of the best Southern-rock bands in history, then the 2015 Muscular Dystrophy Association Ride will take care of all of these things in one fell swoop.

Sponsored by the good folks at Trantolo & Trantolo, Norm LeBlanc and his team have put together one of the most terrific ride packages of the year. It’s not to be missed.
The ride staging and registration will begin at 9 a.m. and continue through 11:30 at co-sponsor TSI Harley-Davidson on Route 83 in Ellington, Connecticut. Breakfast will be available as well.

There will then be a 40-mile, police-escorted ride through the Connecticut countryside that will wind up at the Sun Valley Resort in Stafford Springs.

Riders will then be treated to a home-style barbecue lunch of grilled chicken, sausage, peppers, and onions, homemade pasta and potato salad. Refreshments will also be available; beer and wine will be on sale.

The Arizona Maid Band will be taking the stage at noon, followed by Kim Logan at 1 p.m., and, at 2, the legendary Charlie Daniels Band will hit the stage.

Charlie Daniels originally rode in on the same wave of Southern rock that brought us such bands as the Allman Brothers, Marshall Tucker, the Outlaws and Lynyrd Skynrd. The Charlie Daniels Band has had numerous hits over the years, and Charlie Daniels himself has become well known and outspoken in regards to his love of country, patriotism, and the ideals that make this country great. Ever the showman, you will never walk away from a Charlie Daniels Band show unfulfilled.

The event will cost you $40 per rider if you buy in advance; it’s $50 on the day of the show. Tickets for couples are $60 in advance, or $75 on the day of the event. The same prices apply if you are just attending the meal and show. If you purchase your tickets in advance you will be eligible to win a $1,000 gift card from TSI Harley-Davidson.
You can purchase tickets on line by logging on to mdaridect.com or swing by TSI Harley-Davidson to pick them up in person. This will be a very large event with probably over 1,000 motorcycles so be prepared to ride accordingly.

griz.jpg
Eugene “Griz” Griswold, of Palmer, a longtime biker who fought for motorcyclists’ rights as both chairman and district representative for the Massachusetts Motorcycle Association, died on June 11. He is shown here in one of his favorite roles, filling in for Santa Claus as a member of one of his motorcycle clubs to bring joy to children at the Gray House in Springfield.
DAVID MOLNAR / THE REPUBLICAN

For many years, Griz was a salesman for Tibby’s Harley-Davidson and was a proud and patriotic veteran of the U.S. Navy. Bearing a striking resemblance to Santa Claus with his large frame and flowing white beard, this gentle giant of a man reveled in entertaining thousands of children (as well as adults) at Christmas time and as a member of the Weasels USA motorcycle group was the only one to carry the distinct North Pole back patch. Griz was also an ordained minister who presided over many area weddings. God speed, Griz, you are loved by many and will be sorely missed.
Goings On: Throttle Rocker Magazine will begin its Destination Bike Night series on July 2. These will be an every other Thursday bike night to be held at a different Destination. The first will be at Indian Motorcycle of Springfield located at 962 Southampton Road in Westfield. These will run from 6 to 9 p.m., and there will be vendors, music, food and more. For a complete schedule of Destination Bike Night, log on to throttlerockermagazine.com.

On July 11, it will be the Honor and Remember Bike Run, Concert and Barbecue in memory of Lance Cpl. Phillip M. Bushong. This event will be held at the Southwick Veterans of Foreign Wars Post 872 at 151 Point Grove Road. Registration begins at 9 a.m., and kickstands will be up at 11. The cost is $20 for riders; passengers and walk-ins are $15. There will be live music, a barbecue and raffles. Featured bands will be Point Black, Legion, the Remones and Redhead. The music starts at 2 p.m. with a flag presentation at 3. For information and reserved ticket information call (413) 355-8031.

Until next time, ride safe and ride smart.